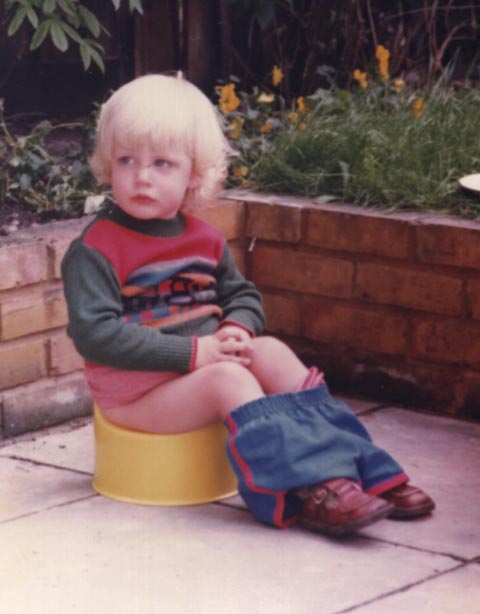 I have been scratching around trying to make what might sound like music since I was 7 years old, when I began to teach myself guitar and piano. I then spent many years unconsciously re-writing Beach Boys songs and making hissy recordings using my mother’s tape-to-tape function.

Not knowing if I wanted to be a musician or a plasticine cartoonist, when I was 15 I saw my opportunity – the lodger had moved out, so I took over the spare room and began turning it into my own 4 track cassette studio. Developing into an obsession, I barricaded myself in that room trying to figure out how to write pop songs until I had recorded 3 albums by the time I was 18, when I was kicked out and went to live with the Krishnas.

Getting married after a 3 day long psychedelic episode, and discovering when we woke up that we sang well together, we ended up at my father’s house, taking over his sitting room and recording 3 more albums in 2 years – which started to get some attention, including festival dates, good support shows and a sofa in a publisher’s office.

Well, fate was not on our side that time – a tragic death, petrol emotion and fragile youth left us in tatters and unable to pull ourselves together again. Out of the wreckage I clambered, creating what would turn into The Mores, rapidly growing into a 17-piece orchestral monster, and which in 2002 saw us as pioneers, being the first band to play many of London’s churches including Shoreditch and St. Giles, both now established venues. With 15 shows in little over a year, running an orchestra, 3 backing singers, a lighting rig, a bar, trying to convince doubtful vicars, I was getting married again every month!

Meanwhile a run in with a Smashing Pumpkins drummer had taken me to a dilapidated artists building where I began construction on my first ‘proper’ studio. Being poor, I acquired a blue Ford Sierra with a red door and a petrol leak and conducted a long season of nightly skip and bin raids across London, gathering together enough materials to build the studio, entirely out of things I had found, for free. Sound on Sound magazine were impressed enough to do a 5 page feature - Look here

Being in the middle of a creative boom in London, pretty soon I started getting people wanting to record with me, helping me pay the rent while we set about putting The Mores on to tape. Two years and one sideways studio expansion later an opportunity to move into the old SARM East studios appeared. Along with 2 partners, in 2005 we refitted the studios and quickly became one of the best places to record in East London, with a huge pooled equipment collection, impressive studio history and a perfect location on Brick Lane. So began an amazing few years both in the studio and on the road, recording, producing and playing on hundreds of sessions with the likes of Florence + the Machine, Glen Matlock, Miss Dynamite, Whirlwind Heat and the Irrepressibles, touring with Babyshambles and Lefthand, and Mores releases with Ambiguous Records. In 2009 the business expanded and the studio relocated to Dean St, Soho, and is now one of London’s most popular studios. See here

As Dean St became more and more of a big business, I needed somewhere I could call my own, so in 2010 we converted our flat in Woolwich into a Joe Meek style setup, with tie lines running from the loft into each of the downstairs rooms. It even had a steam room/echo chamber! It was a beautiful place and I recorded albums for Rob Marr, Jackson Scott, Holly and the Wolf, and singles for Mr. David Viner and LA Salami there.

But with London life becoming strangely simultaneously slower and faster, a Robot starting to breathe life inside me, and a beautiful one year old son in need of some inspiration, in 2012 we packed up 18 cubic metres of recording equipment and drove out to Berlin.

I found myself with a tiny studio in the centre of Berlin, in one of the few remaining original artist’s buildings in the city. There was a language school on the floor below, the owner Andrea was so kind to me, she never complained about the noise, even with me playing drums above her head while she was teaching.. I filled the rooms to the roof with my equipment, the floor was actually bowing in the middle, I was continuously expecting to suddenly find myself lying on top of a pile of broken drums, keyboards and language students!

I got lucky with a networking introduction and found myself getting a lot of work making beatle music for Japanese TV ads - When suddenly I was given 6 months notice of eviction on my little studio, I figured I should finally try to build the dream - Without doubt the hardest thing I've ever built, largely because I didn't have time to keep up with my German lessons (and things sometimes work quite differently here).

We've just passed our 5 year anniversary, and we haven't really stopped since day one.. It's been an amazing experience, everyone has been so supportive and positive, so thanks and love to you all!!